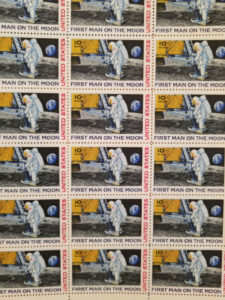 As we celebrate the 50th Anniversary of the Apollo 11 moon landing, I reflect back to that day when I was a mere 7 years old.  I remember knowing that it was a really big deal at the time.  My older teenage sister had a “Moon Walk Party”, and we all sat around our black & white console TV and watched with awe and wonder as the first stepped on to the moon.

As I look back now as an adult, I realize the years of dreaming, planning, building and training that went into such an accomplishment.  This accomplishment was not realized by the 3 astronauts and those in Mission Control alone, but it required 100’s of dedicated NASA personnel, all with their specific purpose in making the program work.

Many of the NASA employees and astronauts called Friendswood “home”.  As a kid, I had many friends who’s parents “worked at NASA”.  It just seemed like a normal thing then, but now I realize that it was much more.  These men and women were dedicated to their work and their common cause.  They shared visions of space exploration, putting a man on the moon, and eventually manning a space station.  With their vision continuing to expand, who knows what the next destination might be.  My hope is that someday I will have the opportunity to sit in front of my digital, high definition TV and witness man stepping out on to Mars.  When this happens, I’m sure that I, along with the rest of the world, will be overcome with the same awe and wonder that we all experienced 50 years ago.

"I appreciated working with Debra because she always showed Integrity and Patience, virtues that I find most commendable in a Realtor.  She is highly... continued"
- Michael & Daisy Keller
View All

As a leader in the Friendswood and Bay Area real estate market, the O’Farrell Realty Team has been exceeding client expectations for over 60 years.  Their attention to detail and unrelentless work ethic will work in your favor as you navigate the local buyer and seller market.